The Sonic Hedgehog gene and the evolution of bat wings

Of the nearly 4 000 mammal species, bats are the only ones capable of powered flight. Their ability goes way beyond the gliding and parachuting skills of lemurs, possums or flying squirrels.

Hunting prey, the bat moves its wings like we move our fingers, changing the wing shape to dart, flip, and turn quickly; the aerial acrobatics of a consummate hunter.

They are also masters at hovering. Like hummingbirds, they can remain stationary in flight, echolocating prey.

Their ability comes from the development of bony fingers, some long (very long) linked by soft tissue. They're called wings, but they're actually webbed hands. 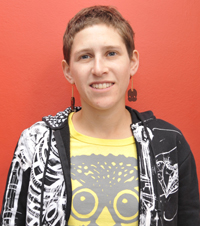 MSc student Dorit Hockman(left) and her colleagues, fellow MSc student Mandy Mason, and supervisors Professors David Jacobs and Nicola Illing in the Departments of Zoology and Molecular Biology, linked the evolution of bats' flying limbs to changes in gene expression in the gaudily-named Sonic Hedgehog gene (Shh), named after a character in the Sega Genesis video game.

In a recently published paper in the prestigious Proceedings of the National Academy of Sciences, Hockman and her co-authors, who included American colleagues Chris Cretekos and Richard Behringer, have described the genetic expression patterns for Shh in the limb development of two bat species, one from Trinidad, and one from the De Hoop Nature Reserve in South Africa.

Shh affects the patterning of cells during development in the embryo in several organs in vertebrates, including the limbs, where it has been shown to specify the fate of the different fingers on our hands.

Bat wings are characterised by a short thumb and very long fingers, while their hindlimbs are remarkably symmetrical, with digits of the same length. Hockman and her colleagues took an educated guess that changes in the expression of Shh might explain the evolution of bat limbs.

Hockman's studies show that while in other vertebrates Shh is only expressed once in the developing limb, a second wave of Shh gene expression may be responsible for the elongation of the digits in the bat's fingers and the retention of webbing between the fingers of the bat wing.

The Sonic Hedgehog gene plays important and wide-ranging biological roles during development. For example, in addition to patterning limbs, it is manufactured in the notochord of developing embryos, that long dorsal rod of cartilaginous material that grows between the tail and the head. Mutations in this gene can lead to anything from death to improper limb development to cyclopia (a fusion of the eyes into one).

The genetic sequences reported in Hockman and her co-authors' paper have been deposited in the GenBank database. GenBank is the National Institutes of Health genetic sequence database. This is an annotated array of all publicly-available DNA sequences, a veritable library of genetic material.

The paper is a coup for the master's graduate, now settled at Cambridge's Trinity College for a four-year PhD, funded by a prestigious Wellcome Trust Scholarship. (Hockman was one of five students selected internationally for this scholarship.)

This work was funded initially by a Stimulation Grant from the University Research Committee, and more recently by a National Research Foundation grant to David Jacobs.

"We've been privileged to have students of Dorit and Mandy's calibre working on the project," Illing said. "This work came out of interdepartmental, cross-disciplinary collaboration between David and myself, where David contributed his knowledge on the ecology of bats, and I contributed my knowledge and interest in the field of evo-devo and limb development."