UCT medicine woman for SANAE base 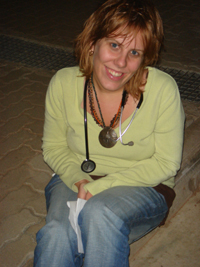 It's Friday night in the Trauma Unit at Groote Schuur Hospital and Dr Joanna Thirsk (MBChB, 2005) is intent on resuscitating a young accident victim. She's closed off to the mayhem around her. After almost a year here, she thinks on her feet.

It's a skill she'll need when she's thousands of miles down south at the South African National Antarctic Expedition (SANAE) base in Antarctica, responsible for the welfare of the 48th winter-over group.

She has also worked at Chris Hani Baragwanath Hospital.

"There you learn big coping mechanisms," she quips.

The only woman on the skeleton team of 10 for the Antarctic, Thirsk will be away for 14 months, responsible for the mental and physical health of the group in the most inhospitable conditions imaginable.

She has been preparing for some time, reading up on polar medicine and bolstering her dental, X-ray and anaesthetics skills. The base is equipped with a fully fledged operating theatre.

At 26, Thirsk is also preparing to put her life on hold. This stint on the giant ice continent will mean two Christmases and a birthday away from home and family.

But it's a season that comes once. It's something she has to do.

In December she will join the team for basic training in non-medical skills like fire fighting and, yes, cooking. Thirsk will also learn to handle heavy vehicles and master the basics of climbing and abseiling.

"I'm not very sporty," she says, "but I've signed up for boot camp for a month."

It's a weighty responsibility for a young doctor.

"The thing about Antarctica is that you can't evacuate anyone," she adds, "unlike Gough and Marion Islands where you can get away with having a paramedic."

Thirsk knows all the stories; the Russian medic who removed his own appendix under local anaesthetic and the doctor who removed a cancerous lump from her breast. You have to be prepared.

She leaves on 23 December, the journey aboard the SA Agulhas expected to take two weeks. The base will be busy then. In the summer season there are plenty of researchers about. After that, they're on their own. The return date is March 2010.

"This attracts me," she says. "I have a keen sense of adventure. I rise to a challenge. And the world will be waiting for me when I get back."

Emergency medicine has always interested her and she hopes to specialise in the field.

In Antarctica, medical conditions like polar T3 syndrome (T3 is a thyroid hormone), are common. It's a mental affliction that hits most winter-over crew. Lethargy, mood swings and forgetfulness are symptoms. A lack of vitamin D (daylight disappears as winter sets in) may be linked to the disorder.

"I must ensure the team is kept busy and socially active."

Socially active? Wares from sponsors like wine farms and book stores are being sought to add to the cache of goodies they're taking along to add some cheer. Thirsk has bought a single-lens reflex camera and intends teaching herself to play the guitar.

She will also tend to the team's nutritional health, ensure they wear the proper gear to stave off frostbite and that they use the right equipment to maintain safety.

"Polar medicine is a sub speciality in its own right. The psychiatric component is big."
Like Antarctica.