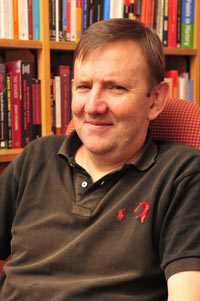 Dr Sean Field of the Centre for Popular Memory in UCT's Department of Historical Studies has been selected as the new vice-president of the International Oral History Association (IOHA).

Field was elected at a recent IOHA conference in Guadalajara, Mexico, and will serve as the association's vice-president until 2010.

"I'd already been active in the executive committee for several years, so it was just a matter of time," quips Field.

The IOHA is a worldwide network of oral history scholars, professionals, and researchers, first established about 30 years ago. It currently boasts a wide membership from all over the world. Field's tasks as vice-president run from web development to moderating debates, but his primary goal is membership development.

I'd like to expand participation of African and especially Southern African oral historians," he says.

The obstacle here is resources. In his two years as vice-president, Field hopes to raise funds from developed countries to finance the participation of scholars who come from developing countries with a rich tradition in oral history.