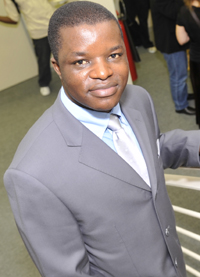 "For me, every day of the week is a school day," he declared in his acceptance speech at UCT on 18 August.

Mpapane, a maths and science teacher at Inkomazi High School in Mangweni, Mpumalanga, has an exceptional track record. Between 90% and 100% of his students have passed every year for the past five years, and some of his students have even scored a perfect 100% in their final exams.

He was nominated for the award by UCT student and former pupil Nhlanhla Nkuna.

"For the past 18 years he has been teaching with excellence," says Nkuna. "He has won the award for best maths teacher in the Mpumalanga Education Department's Ehlanzeni region every year since 1996, including this year. His passion, dedication and love for what he does are the things that motivate me every time I meet a challenge."

Stella Clark was a language development lecturer in the Academic Development Programme at UCT's Centre for Higher Education Development from 1996 until her death in March 2005. The teacher's award was established to honour her many years of dedicated service to teaching students from educationally disadvantaged schools.