Meadows is vice-president of the International Geographical Union 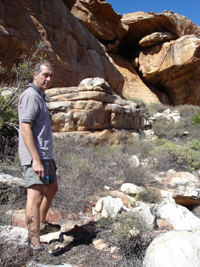 Professor Mike Meadows, head of the Department of Environmental and Geographical Science, is the new vice-president of the International Geographical Union (IGU) following its 31st congress in Tunis this month.

The IGU is the premier international body of academic geographers and is affiliated to the International Council of Scientific Union.

The union promotes the study of geographical problems and initiates and co-ordinates geographical research requiring international co-operation for scientific discussion and publication.

The organisation was founded in 1922 in Brussels.

The new executive committee, elected by the national committee delegates of more than 50 member countries, is led by Professor Ron Abler of the US.

Professor Woo-ik Yu of Korea is the general secretary, while the other vice-presidents (elected or re-elected) hail from Mexico, Russia, Italy, Germany, Finland, Israel, Australia and China.

Meadows will serve as vice-president for six years.