Five European premieres in one month 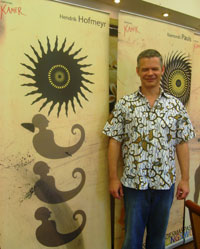 Associate Professor Hendrik Hofmeyr of the UCT School of Music has had a busy month. Five of his compositions were premiered in Europe in July, at the World Sun Songs concerts held in Riga, Latvia, and at the World Choir Games in Graz, Austria.

Hofmeyr was one of 17 composers commissioned to write works about the sun for World Sun Songs. The works, including Hofmeyr's Desert Sun, were performed at two sold-out concerts on 3 and 4 July, and broadcast live on national television. The works were later performed at the World Choral Symposium in Copenhagen.

A further four of Hofmeyr's works were performed at the World Choir Games, which are widely regarded as the choral Olympics. South Africa took 22 gold medals, the highest number by any country.

The country's top choirs, including the Stellenberg Girls' Choir and Stellenbosch University Choir premiered works commissioned from Hofmeyr for the competition. Pro Cantu, directed by Leon Starker, sang Batter my Heart, and Pie Jesu, written in memory of Laura Searle, was also performed.