Pipped-at-the-post Ikeys team of the tournament

The courageous Ikey Tigers might have gone down 10-16 to the Maties in the last minute of a see-saw final in the inaugural FNB Varsity Cup in Stellenbosch last night, but they were voted the team that played the best rugby.

That may not have been consolation enough for a group of mainly under-21 players, skippered by man-of-the-match, inspirational no 8, JJ Gagiano. They wanted the win. 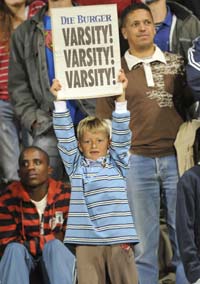 The Ikeys ran in two sublime tries, courtesy of wingers Mat Turner and Marcello Sampson, top try scorers in the tournament. Ultimately, too little possession and poor kicking cost them dearly against a Stellenbosch side that was buoyed by Stormers' player Joe Pietersen. (Where did he come from and what was he doing in a development tournament?)

Leading 10-9 into the final moments of the game, when the Ikeys won the ball from a scrum on their goal line they should have kicked it out. But they fluffed it. The Maties swung it wide to Therlow Pietersen and the Ikeys' defence was too stretched.

But there's much good to write home about concerning this spirited young team who produced what the sponsors called for: Rugby that Rocks.

Seeded eighth on the Varsity Cup log, their coveted best players of the tournament team award brought their winnings on a par with the Maties' R250 000 first prize. The Ikeys bagged R150 000 as runners up and R100 000 for their team prize.