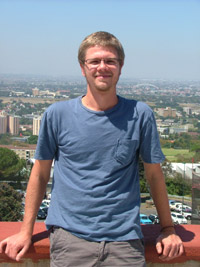 Right at this moment, Johan van Heerden, an MSc student in the Department of Molecular Cell Biology, is holed up in Spain, looking at the relationship between genes in the immune system and a suite of neural genes associated with anxiety-related psychiatric disorders.

In keeping with the initial focus of the Brain Behaviour Initiative (BBI), a UCT signature research theme, Van Heerden's project centres around psychological vulnerability and resilience after trauma. His work aims to provide insight into the potential of non-neural tissues (peripheral tissues) as diagnostic targets for psychiatric disorders.

The BBI's experimental model, maternal separation, entails the daily separation of mice pups from their mother during the first two weeks of development, a critical period.

Previous studies have shown that maternal separation during early development in mice leads to increased fear- and anxiety responses during adulthood, explains Van Heerden. Typically, these animals display behaviours that are characterised by an increased aversion towards environments that might pose a vulnerability threat, compared to animals not exposed to maternal separation.

"It is known that this outcome is the result of environmentally induced modifications of important stress-associated genes," says Van Heerden.

Physiological data indicate that separated animals have much higher levels of circulating stress hormones than non-separated ones.

But the BBI researchers want to dig deeper; right into the innermost workings of the brain, to be exact.

"We are looking at the extent that this kind of early developmental deprivation affects key areas of the brain and whether these neural changes have long-term effects on other aspects of an organism's biology, such as immune function," says Van Heerden,

Initial findings are promising. One analysis of gene expression from the brain's prefrontal cortex - an area involved in everything from impulse control and judgement to sexual behaviour and socialisation - has revealed a selection of genes previously implicated in psychiatric disorders.

Which brings us to Van Heerden's sojourn at the Spanish Institute of Bioinformatics, aka the CIPF, in Valencia, Spain, an exchange funded by a collaborative project in neuroscience and functional genomics. The collaboration is led by Van Heerden's UCT supervisor Professor Nicola Illing and Dr Joaquin Dopazo, a world-renowned bioinformatician at the Valencia centre.

Over the next three months, Van Heerden will process gene-expression data for hippocampal and hypothalamic tissues, as well that from a set of immune cells known as peripheral blood mononuclear cells, or PBMCs. Using PBMCs, scientists have been able to "intercept" the biological dialogue between the brain and the immune system, and infer from this the nature of "malfunctions" in the brain, explains Van Heerden.

"We wish to further the current understanding of these functional exchanges, and the extent to which they might be exploited, to infer various neural dysregulations associated with psychiatric disorders."

It's hoped that these findings will contribute towards the potential development of non-invasive diagnostic techniques for psychiatric disorders. These new techniques will use modern molecular methods in tandem with classic classification systems such as the International Classification of Diseases (ICD-10) and the Diagnostic and Statistical Manual of Mental Disorders (DSM-IV).

If things pan out, this molecular approach will allow for the early identification of psychiatric disorders, and also provide new avenues for drug development.