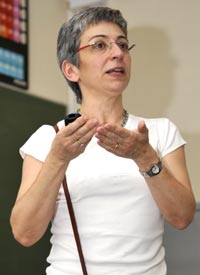 New anti-malarials are needed to combat drug resistant-strains of malaria, Professor Donatella Taramelli said at the launch of the 2008 series in the Merck Seminar Programme in the Department of Chemistry.

The seminar programme has been presented for the past seven years.

Taramelli, of the Department of Public health, Microbiology and Virology at the University of Milan, was providing an overview of the Milan Malaria Network.

"Little can be done by a single chemist," she said. "We're trying to build a network like SAAVI (South African AIDS Vaccine Initiative)."

The network has two aims: to discover, screen and study the early transitioning of new anti-malarial drugs, and second, to study the pathogenesis of severe malaria. It works with collaborators around the world.

Taramelli said the fight against malaria, which kills thousands of African children daily, was bedevilled by limited research and development for anti-malarial drugs. In addition, Africa was burdened by the high costs of access to drugs.