Out of the mouths of fishes 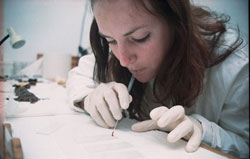 The title of Yeld's talk is bit of a mouthful: Biodiversity and taxonomy of the parasites of two endemic catshark species, Haploblepharus pictus and H. edwardsii, including a new species of Trypanosoma (Kinetoplastida: Trypanosomatidae), from the west and south coasts of South Africa.

In short, her work focuses on the description of a new species of protozoan blood parasite from sharks.

The International Symposium on Fish Parasites is held every four years and this year's theme, fish parasitology in the 21st century, encompassed all aspects of the field, from biodiversity to global warming. Yeld attended the symposium on a travel grant from the South African Biosystematics Initiative.