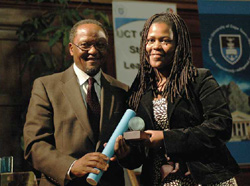 Mqolomba has a long track record of leadership, having served on numerous student, residence and faculty committees as well as the Black Management Forum and the executive committee of the International Youth Leadership Africa Forum. She played a â€œsignificant roleâ€ in restoring credibility in the SRC.

David Watson received the Deputy Vice-Chancellor's Student Leader Award. He was chair of the Humanities Student Council and the Debating Union and involved in the UCT Treatment Action Campaign.

Nadia Oshry, and Lusanda Gwayi won the Executive Director: DSA's Student Leader Award. As 2006/2007 residence co-ordinator, Oshry was recognised for her outstanding contribution to the student body and to residences. Among other initiatives, Gwayi revived the Student Leaders Transformation Forum and was a key partner in the UCT Respect campaign.

Lehlohonolo Pulehlhane took the award for Most Outstanding Student Leader in a Postgraduate Student Faculty Council. Under Pulehlhane's leadership, the postgraduate sector was officially recognised by the student governance structure at UCT.

The Most Outstanding Student Leader in Residence award was scooped by Nadia Oshry for building sound relations with the Student Housing Office and the University Building and Development Committee.

Steve Kenyon was awarded the Most Outstanding Student Leader in a Society or Student Organisation, honouring his leadership in the area of transformation, particularly the UCT Rainbow Society, which launched a campaign against the stigma attached to homosexuality.