You must steer Africa, says Gurirab 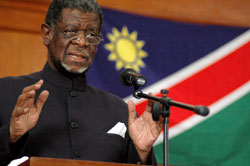 Every year NAMSO invites high-level Namibians to deliver an inspirational talk at UCT. Last year's guest was now retired track star Frankie Fredericks. The talk, on 28 September, was followed in the evening by the handing over of the old committee to the new, the giving of special awards and a cocktail function.

Gurirab praised UCT for being "a foremost oasis of intellectual excellence".

"Whether you like it or not, you are the leaders of the people," he said. "Don't waste your time on selfish pursuits; sharpen your intellect in the service of the people."

"Because when the day comes, you can stand in front of the next generation to share your thoughts and experiences," he said. "Make history in your own time and space. Africa's destiny cannot be left to others to do it for us."