Rocket science is a blast at Arniston 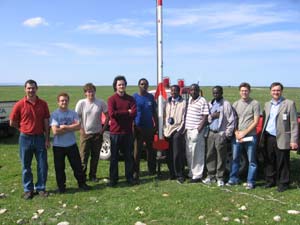 Right stuff: Postgraduate students on the Introduction to Space Technology course launched their rocket at the Overberg Test Range near Arniston recently.

Course co-ordinator Dr Peter Martinez said: 'This year marks the 50th anniversary of the Space Age. South Africa is establishing a national space agency and it's important to ensure that we have adequately trained space scientists and engineers to carry out the future national space programme.'

The students have been taught by experts from nine leading space facilities, their lectures complemented by a team project on the design and construction challenges of a real launch.

The rocket's payloads included two onboard cameras, a flight computer, sensors, a GPS module, telemetry and associated ground-receiving equipment. The first stage of the rocket achieved an altitude of 600m.

'Although the upper stage motor failed to ignite, the flight was a great success in terms of validating the rocket motors, instrumentation and various flight and safety procedures,' Martinez noted. The flight data will be used to analyse the rocket's performance and to improve its capabilities.