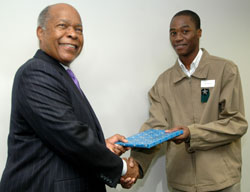 A donor recognition event to announce the launch of the new Hamilton Naki-MESAB-United Therapeutics Scholarship was held at the Faculty of Health Sciences on 4 September.

This is the first partnership between UCT and US biotechnology company, United Therapeutics, which has pledged to fund two full-cost scholarships. Each scholarship awards a student R70 000 per annum for six years for the completion of an MBChB degree. The first recipient is second-year medical student Moses Matlhadisa.

The scholarship is named in honor of Hamilton Naki, who assisted Dr Christiaan Barnard during the world's first heart transplant operation at Groote Schuur Hospital in 1967. His roles as a teacher, trainer, and surgical assistant went unrecognised in the apartheid years, and he retired on a gardener's pension.

The key players in the brokering of the new partnership were guest of honour Dr Louis Sullivan, executive board member of United Therapeutics, and Dr Saul Levin of the now defunct Medical Education for South African Blacks (MESAB), as well as UCT representatives.