Research output at an all-time high 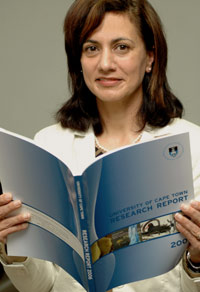 Vice-Chancellor and Principal Professor Njabulo S Ndebele was the first to receive a 2006 Research Report at its launch on 4 September.

According to the report, which highlights the year's research achievements, UCT retains its position as the institution with the highest number of NRF-rated researchers '“ 275 - in South Africa. Moreover, UCT has about one third of our A-rated researchers. There was also a significant increase in the number of research contracts signed, as well as funding from international sources.

The announcement at the end of 2006 marked the conclusion of the first round of the Department of Science and Technology's new South African Research Chairs Initiative (SARChI), one that will attempt to reverse the country's decline in research output and renew and extend the country's scientific infrastructure base.

At the launch of the report, the Postgraduate Studies Funding Committee also announced the 13 senior students who have been awarded 2007 Research Associateships. These prestigious associateships reward excellent student researchers and recognise and support the work of their supervisors.

In the picture above is Deputy Vice-Chancellor Professor Cheryl de la Rey at the 2006 Research Report launch on 4 September.

The report is available online.