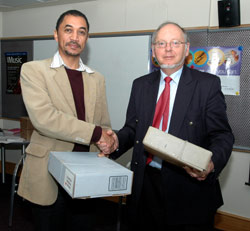 The collection consists of over one million press clippings from seven major South African newspapers from 1975 to 2000. Each clipping is numbered, dated and categorised for quick reference. Packed into 2 500 filing boxes, the collection fills three full-sized rooms.

This is one of the reasons for the donation. SALDRU couldn't find a safe harbour for this invaluable research tool, and a year ago had the collection scanned onto what is now a set of 15 DVDs.

And instead of simply ditching the clippings themselves, SALDRU has found a new home for it: the Fort Hare University Liberation Archives, which is a collection of previously banned material from South African liberation organisations. The university is planning a new building to store the enormous archive.

In the meantime, SALDRU has sold copies of its box sets to universities in the US, the UK and in South Africa. At UCT, the set is available at DataFirst in the Leslie Social Sciences Building.