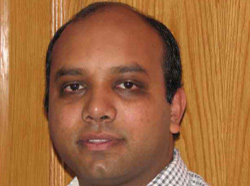 Over the moon: Cosmologist and UCT graduate Dr Kavilan Moodley has received the Silver Jubilee Medal for 2007 from the South African Institute of Physics.

UCT graduate Dr Kavilan Moodley has won the prestigious Silver Jubilee Medal for 2007 from the South African Institute of Physics for his outstanding contribution to the physics research community.

The medal, awarded every two years to young researchers under the age of 35, was presented to Moodley at the opening of the institute's 52nd annual conference, held at the University of Witwatersrand last week.

Moodley (32), who did both his BSc and BSc honours at UCT, ran a research internship programme for students from disadvantaged backgrounds, lectured at the African Institute of Mathematical Sciences and on the National Astrophysics and Space Science Programme.

His fundraising efforts have resulted in a flux of international visitors to South Africa, and allowed many students to travel to the United States, France, the United Kingdom and Chile.

A senior lecturer at the University of KwaZulu-Natal, Moodley works in the field of cosmology, which has become one of the most attractive and competitive research areas in recent years.

His work earned him a place in the Atacama Cosmology Telescope project in Chile, a new-generation Cosmic Microwave Background experiment run by the team that managed the successful Wilkinson Microwave Anisotropy Probe project for NASA.

Moodley was also invited to join the science advisory committee for the International Square Kilometre Array and is currently supervising a project involving pulsars and gravitational wave science.