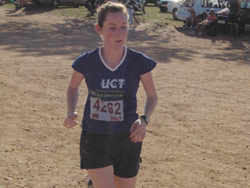 Fit: Amy Aronson making up ground in a recent cross-country competition; she is currently second in the WP 8km individual league.

The UCT Athletics Club has been busy, what with the women's team topping the cross-country league, provincial caps, and the comrade that ran the Comrades with gusto.

Okreglicki won the Bill Rowan medal, a medal of silver and bronze awarded to athletes who complete the race between seven-and-a-half and nine hours. Okreglicki was also the winner of the Addo 100 Miler earlier this year.

In other news, Lauren Stewart has been included in the Western Province team to take part in the national half-marathon champs in Durban in July. And the women's cross-country team won the third cross country league at Blackheath on 27 May, and the fourth league at Strandfontein on 9 June, placing them first overall for the season thus far. Stewart was third in both those races and Amy Aronson fourth. Aronson is second in the Western Province 8km individual league.

The men's teams have also been doing well, although against really strong competition this year, currently lying sixth in the 12km league.