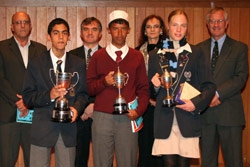 Al-Azahar, Rondebosch Boys and DF Malan were among the big winners at the 30 May prize-giving ceremony of the annual UCT Mathematics Competition.

The competition, which honours outstanding achievement in mathematics in Western Cape schools, attracted a record-breaking 6 160 competitors from 138 schools on 24 April this year, the highest number since its launch in 1977.

Professor Cyril O'Connor, dean of the Faculty of Engineering & the Built Environment (EBE), presented the Mona Leeuwenburg Trophy, awarded to the top school in the competition, to Rondebosch Boys High School. The UCT Trophy, which is awarded for the best performance by a school that has taken part in the competition not more than three times, was won by Al-Azahar High School.

The Diane Tucker Trophy, which is awarded to the top girl in the competition, was won by Melissa Munnik from DF Malan High School for the third year running.

The competition is sponsored by Africon, the biggest consulting engineering company in Africa, the Faculty of Science and EBE. Prizes are sponsored by Casio and Oxford University Press.