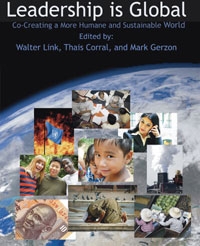 Leadership is Global: Co-creating a more humane and sustainable world features a collection of 21 essays that have one thing in common '“ a focus on leadership in an interdependent world and the ways people can effectively co-operate and overcome conflicts.

Launched by the Centre for Leadership and Public Values (CLPV) at the Graduate School of Business on 2 May, the text comments on the complexity of the challenges as well as opportunities facing leaders.

The book, currently being distributed across the globe, was published by the Global Leadership Network and edited by its co-chairpersons, Walter Link, Thais Corral and Mark Gerzon.

The essays have been written by 25 'distinguished' authors from across the world, including CLPV director, Ceri Oliver-Evans.

The authors argue that global solutions to intractable problems require uniting people across the potential divides of not only nationality and culture, religion and political beliefs, but also of societal sectors and social classes, which are as divisive and often more subtle than national borders.

Oliver-Evans, who wrote an essay called Serving the Common Good, says, 'The book strongly advocates for and presents a vision of an alternate reality; a shift from hierarchy to co-creation, dominance to partnership, from ego-centred to collective consciousness and from being fear-driven to love-based.'