Truckload of accolades for Rencken 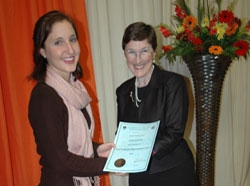 Among these are the University Gold Medal in Medicine for the most distinguished student graduating with honours, the Surgery Class Medal, and the Jack Prisman Prize as the best final-year MBChB student.

The evening also saw the first award of the Professor Mary Robertson Prize for Excellence to the top female MBChB graduate. No surprises, there; Rencken gathered this one, too.

A UCT alumnus and eminent neuropsychiatrist, now working in the UK, Robertson was in Cape Town to make the award. An eleventh-generation South African (she was the fourth generation of her family to have graduated from UCT) she was the first woman to receive a Doctor of Science in Medicine at UCT, and only the ninth recipient.

She instituted the prize in recognition of her DSc and her family's enduring relationship with UCT.

The DSc is the faculty's most senior doctorate, rarely awarded and only to persons of 'exceptional academic merit' on the basis of original published work.

Robertson also bestowed a full scholarship for a financially needy female medical student (from second to final year). This will be made at the end of the year.