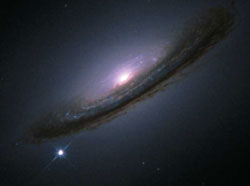 Rising star: RenÃ©e Hlozek is part of a team of researchers who have used an estimation method to study supernovae. Their paper is soon to appear in Physical Review D.

Astrophysics master's student RenÃ©e Hlozek, together with her supervisor Associate Professor Bruce Bassett of UCT and fellow researcher Professor Martin Kunz from the University of Geneva, have made headlines for their paper that's been accepted for upcoming publishing in the journal Physical Review D.

The paper, titled Bayesian Estimation Applied to Multiple Species (BEAMS), covers the researchers' work on BEAMS, a self-designed all-purpose estimation method that makes working through a mass of cosmology data, which up till now had to be done by hand, a cinch.

Hlozek, one of only 19 students in the National Astrophysics and Space Science Programme (NASSP) that's hosted by UCT, originally undertook this project as part of her honours degree in astrophysics and space science last year. But the scope of her work sparked plenty of interest. Apart from the paper in Physical Review D, Hlozek also did a presentation on BEAMS at a seminar at the Institute of Cosmology and Gravitation at the University of Portsmouth late last year, where her work was well received.

BEAMS is used in astronomy and cosmology to study supernovae, or exploding stars, in the search for answers as to why the universe is accelerating.

The problem to date has not been the collecting of the data, but the weeding out of information that shrouds the true statistics, says Bassett, based in the Department of Mathematics and Applied Mathematics and a research astronomer at the South African Astronomical Observatory. This is because only certain types of supernovae can give insight into the inner workings of the universe.

BEAMS makes it possible to remove the data from supernovae that taint the information.

Furthermore, as Bassett says, doing this by hand is no longer an option. "In the future we will have so much data that this won't be possible."

Hlozek adds to this sentiment by predicting a data explosion in the next 15 years.

But BEAMS can also help with everyday guesstimates.

"Imagine you had the heights of 10 000 people and you wanted to estimate the average height of women from that data," Bassett postulates. The problem, though, as with supernovae data, is that you don't know for certain which of the 10 000 people are male or female.

The question then is, how do you estimate the average height of women from the data? BEAMS can answer this.

BEAMS, Hlozek says, finds its roots in Bayesian logic - around since the 1700s and used widely in statistics and cosmology - which argues that the only way to quantify a situation with an uncertain outcome is through determining its probability. "BEAMS is a simple way of using Bayesian theory to estimate the true properties of the population of interest," she says.

And by looking at graphs of data using BEAMS versus data not using BEAMS, the value of the work speaks for itself. BEAMS isolates the thin distribution from the wider distribution, even when working with a mixture of data from both distributions.

From there, as the UCT researchers argue, the sky's the limit for BEAMS.