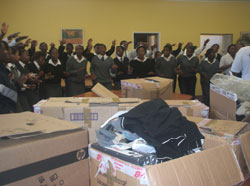 On 3 May, boxes brimming with sports goodies made their way to ID Mkhize Secondary school in Gugulethu, the school '˜adopted' by the Sports Science Institute of South Africa (SSISA).

For the fourth year running, the institute donated staff uniforms and extra kit - which would otherwise be gathering dust in cupboards - to the school. The plan is to clad and kit all the school's sports teams.

This year the SSISA handed over about 100 tracksuits, 300 shirts, shorts and other sporting gear, says Gill Taylor, one of the managers in the Outreach Division at SSISA. The SSISA's sponsor, New Balance, wholeheartedly supported the idea, she adds.

'We will stand by our decision to look after the school, Taylor says. 'We've had many favourable comments from other schools who have played against ID Mkhize.'

And there's more good news. MACSTEEL Maestros, a programme under the SSISA umbrella for elite athletes from disadvantaged circumstances, has just agreed to fund ID Mkhize to join Teenactive, an interactive website, says Taylor, MACSTEEL Maestros national manager. This enables learners to go online and access sports-related information, as well as topics on learning and assertiveness.