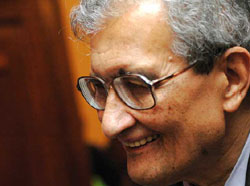 The big picture: According to Prof Amartya Sen, violence around the world can only be explained by a theory that marries the social, cultural and economic.

It would be simplistic to blame the all-too-visible violence in the world on any one factor, said 1998 Nobel laureate Prof Amartya Sen, delivering the Vice-Chancellor's Open Lecture, titled Poverty, War and Peace, at UCT on 23 April.

Social, cultural and even economic theorists are quick to point the finger in one direction only, said Sen, be it religion (prompting talk of a modern-day clash of civilisations), nationality, ethnicity or even economics. But the "solitarist" view of such theories is narrow-minded, he cautioned.

"They do not work in isolation from each other. We have to resist the temptation of shortcuts that claim to deliver insights through their single-minded concentration on some one factor or another, ignoring other central features of an integrated picture."

As part of an agreement between UCT and Wits University, Sen's talk was a repeat of the third Nadine Gordimer Lecture, which he delivered at Wits on 18 April.

The lecture at UCT was followed by an open discussion with Sen the following day, 24 April, where the audience could challenge his views and seek further explanation.