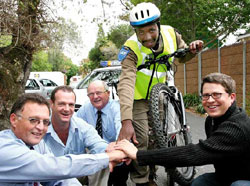 Some new wheels will keep crime prevention turning in the Rosebank area, thanks to action by UCT and the Liesbeeck Neighbourhood Watch. They have appointed ADT Security to implement a proactive bicycle patrol in the area, which has traditionally been home to many UCT students.

UCT's risk service manager John Tunstall said: "A large proportion of Rosebank residents are students who are often vulnerable at night when they are getting to and from class or walking around. The bicycle patrol will make them feel safer, and will also have the support of ADT's armed response service when necessary."

Chair of the Liesbeeck Neighbourhood Watch, Martin Kirsten, said: "Thanks to generous support from UCT, ADT, Starke Ayres Garden Centre and local residents, we have been able to start the bicycle patrol, which will operate around the clock."

Kirsten added that they were hoping to launch a second patrol in the area.