Taking science out of the ivory towers 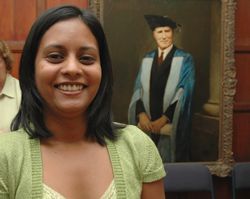 Four bright scientists, two from UCT, were toasted on Monday, 26 March, at the awards ceremony for the South African Agency for Science and Technology Advancement (SAASTA)/Saturday Star Young Science Writer's Competition of 2006.

UCT PhD student Dheshnie Govender, with the winning paper on stem cells and graying hair, A Silver Lining, won a SAASTA-sponsored trip to attend the American Association for the Advancement of Science meeting in San Francisco this year. The three runners-up, including UCT's Cayle Sharrock, share a R16 000 cash prize.

Journalists don't always grasp the intricacies of science, while scientists stereotypically struggle to express themselves beyond a small academic community, said speakers at the function. The SAASTA competition, open to young scientists from tertiary institutions and science councils in South Africa, aims to make science accessible to the public in general.

'There is no system of blending science with journalism,' says Saturday Star executive editor, Brendan Seary. 'We need to encourage scientists to communicate better and train our journalists to be science journalists.'