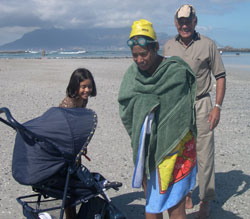 Dr Diane Wilcox with dad, Robert Wilcox, niece Maxine and son Aidan (in pram) after her swim from Robben Island to Blouberg Beach on 24 March.

UCT lecturer Dr Diane Wilcox completed the icy 7.4km swim from Robben Island to Blouberg on Saturday, 24 March, in a time of 2 hours and 47 minutes.

For Wilcox, a lecturer in the Department of Mathematics and Applied Mathematics, it was more than just a swim, though. She was just three months old and her brother four when their father, Robert Wilcox, was detained and then convicted of terrorism, along with 12 others, in 1971.

He was imprisoned on Robben Island, and Wilcox saw her father only on his release in 1978.

'Robben Island has always been part of my life," she says.

But Robert was among the family members '“ which included Wilcox's six-month-old son, Aidan '“ to welcome his daughter on Blouberg beach at the end of her marathon swim.

Wilcox also dedicated the swim to her mother, 'for steering us safely through the separation'.