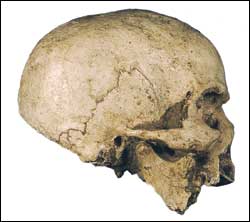 The Hofmeyr Skull shows that Africans and Europeans looked very similar around 36 000 years ago. It was discovered near the Karoo town of Hofmeyr, about 70km northeast of Cradock, but was dated only recently, using new techniques. The fossil also shows characteristics of modern humans: it lacks "beetle brows", and has smaller jaws and teeth than earlier, non-modern human fossils.

A mud-filled human skull found in an erosion channel by a dam construction worker near Hofmeyr, Eastern Cape, around 1954 and only recently dated to 36 000 years, corroborates genetic evidence that modern humans probably originated in sub-Saharan Africa and migrated at about this time to colonise the Old World.

The development has added another piece to an intriguing puzzle about the evolutionary origins of modern people. The skull also shows that Africans and Europeans looked very similar at that time.

Commenting on the skull's significance on the eve of a Science paper publication (Late Pleistocene Human Skull from Hofmeyr, South Africa, and Modern Human Origins, 12 January 2007), UCT's Professor Alan Morris of the Department of Human Biology said: "The Hofmeyr skull gives us the first insights into the morphology of such a sub-Saharan population at a time when the migrations of modern humans had just left Africa."

Morris is part of an international team of scientists, led by Frederick Grine of Stony Brook University, New York, who conducted the study. The mysteries locked into the skull were made known only after a new dating technique determined its age - over 50 years after its discovery.

Because the carbon-containing organic matter had leached from the skull bone over the millennia, preventing the use of carbon dating methods, the researchers had to look to a combination of uranium-series and optically stimulated luminescence dating techniques.

Working with mud from deep within the skull, mud that had not seen the light of day since the death of the Hofmeyr man, Oxford University geomorphologist Dr Richard Bailey was finally able to place the skull in time.

The skull's age is significant. Despite its generally rich palaeontological heritage, sub-Saharan Africa is devoid of human fossils from between 70 000 and 15 000 years ago, leaving a critical gap in human evolutionary history.

"Because the Khoe-San are represented in the recent South African archaeological record and have an ancient genetic heritage in the region, the Hofmeyr skull was expected to closely resemble them," Morris explained.

Instead, this South African fossil has a very close affinity with the European Upper Palaeolithic specimens and is quite distinct from recent sub-Saharan Africans, including the Khoe-San. The team's findings agree with the genetics-based Out of Africa theory, which predicts that humans, like those that inhabited Eurasia in the Upper Palaeolithic, would have been found in sub-Saharan Africa around 36 000 years ago.

Various genetic studies (especially those on the mitochondrial DNA) of living people indicate that modern humans evolved in sub-Saharan Africa and then left between 65 000 and 25 000 years ago to colonise the Old World.

"Until now, lack of human fossils of appropriate antiquity from sub-Saharan Africa has meant that these competing genetic models of human evolution could not be tested by palaeontological evidence."

The Hofmeyr Skull has changed that. Using skull measurements that are known to differentiate recent human populations according to their geographic distributions and genetic relationships, team member Katerina Harvati of the Max Planck Institute in Leipzig established the affinities of the Hofmeyr fossil by comparing it with contemporaneous Upper Palaeolithic skulls from Europe and with the skulls of living sub-Saharan Africans, including the Khoe-San.

The skull's latter history has been convoluted. The cranium was discovered during the construction of anti-erosion weirs in the Hofmeyr area in 1954 or 1955, but was only reported to the late Marge Courtenay-Latimer at the East London Museum in 1956.

"She was the only person to have visited the site before the erosion dams filled in the discovery site," Morris said. "I arranged for her to come with me to the site in 1992 to point out the exact location. Because the skull seemed impossible to date, it was only briefly looked at by the anthropologists in the 1960s and 1970s. But its significance was overlooked and it was never published. The skull was relocated in the Port Elizabeth Museum by Francis Thackeray in 1989 and it was he who brought it to my attention."

Although Grine was the guiding force for the dating and bringing in several co-workers, the original concept for the project was Morris' and the first morphological studies showing it was not Khoe-San were done by Morris and postdoctoral student Isabelle Ribot. Ribot, now of the University of Montreal, worked on the skull while she was a postdoctoral student at UCT.

Following the huge public interest in the finding, Morris says the team is gathering morphometric data to extend the comparative sample to South African prehistoric skeletons.

"I'd like to follow up by looking at specimens in collections around the country for date and context.

"Sometimes you don't have to do new excavations. We can check the collections we already have. One of the important issues is to show that specimens collected long ago, and thought to be interesting but not important, are both interesting and important."

The challenge is to ensure the collections are well maintained.

"This underpins our argument about reburial, which is only appropriate when we can link the skeletons to living descendant populations. Older specimens without context but still held in museum vaults may be just the ones that provide the valuable insights."