Much ado about science 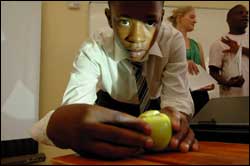 An apple a day: The workshop, Symmetry in Nature, made symmetry simple. Agog: About 1 600 pupils attended the UCT Science Day.

It was the first of its kind both in the Cape Flats community and the province.

The idea behind this fun day, said Anusuya Chinsamy-Turan, professor of zoology and chair of the marketing committee that organised the day, is to excite children about science and to enhance such partnerships between the school community and UCT.

"Already there are requests from Southern Suburb schools to host similar days. We would like to do more work with schools."

Science-related workshops and exhibitions - from gadgets galore to tiny organisms visible only through the microscope's eye - drew hordes of pupils from some 24 surrounding schools.

UCT departments, including the likes of astronomy, botany and zoology, teamed up with organisations like the MTN ScienCentre and the South African Weather Bureau to turn the hall's floor into a scientific labyrinth - where even the previous generation's child could lose themselves for hours.

For the faint-hearted there were apples to cut in the Symmetry in Nature workshop, while the true blues could have their blood-type determined at the Western Cape Blood Transfusion stand.

"My experience from this, the first time we work together with UCT," said headmaster of the school, Sheigh Irafaan Abrahams, "is one of professional organisation and a positive response to an educational and informative day."