ACEs active on campus during O-week 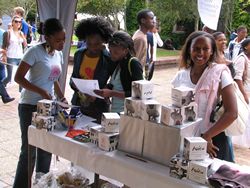 Can't touch this' without a condom is the message that has greeted this year's UCT Freshers. The latest campaign by HIV/AIDS Co-ordination UCT (HAICU) is unambiguous in its message: If you choose not to abstain from sex, wear a condom so you will be protected from sexually transmitted infections, including HIV, as well as pregnancy.

A pack is being distributed to each Fresher during Orientation Week, inside which is a pair of boxer shorts with the Can't touch this motif, a pack of condoms and information on services available to UCT students, including counselling and testing sites.

The campaign dovetails with a series of Orientation workshops run by AIDS Community Educators (ACEs), students who have been trained by HAICU to convey HIV- and AIDS-related information to their peers. The workshops include discussions on HIV transmission and prevention, and the support services available at UCT for people affected by and living with HIV.

Further workshops will be held later in the year to address related issues, such as gender, relationships and stigma.