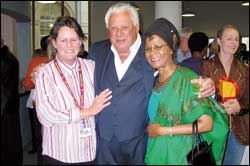 Denny's name is synonymous with award-winning work, particularly on the early detection of pre-cancerous lesions of the cervix among poor black women who have no access to expensive screening programmes.

"We plan to look at safety and immune responses to determine whether African women and girls respond in the same way as their European counterparts. This will establish a safety profile," Denny said. "We can't assume there are no biological differences between African and European women."

"In Africa, the research infrastructure required to do trials is huge."

Nonetheless, Denny believes it's a vaccine every girl should have. In an ideal world, girls from 10 should be vaccinated; a series of three intramuscular injections.

"But we need to catch girls early, before they become sexually active and are exposed to the HPV virus."

While there is a national screening policy in South Africa, there has been limited implementation.

"The problem with cervical cancer is that it strikes women at the peak of their lives, in their 40s and 50s, just at the time when they are playing their most important roles in society: in their families and in their careers," Denny said. "And it's preventable."

HPV is a virus that commonly infects the genital tract. Estimates show that between 60% and 80% of sexually active young people will at some stage have an asymptomatic infection caused by one of the 40 types of HPV that infect the genital tract.

"Our immune system just gets rid of these viruses, but in a small percentage of women, the virus infection remains persistent for up to 30 years before they develop cancer."

It is believed that the two vaccines have the potential to prevent 70% of cervical cancers caused by HPV types 16 and 18. The challenge is to administer vaccines between 10 and 12 years of age, prior to the onset of sexual activity, to both girls and boys as boys are the vectors of HPV.

But there are formidable challenges to implementing the vaccine.

"What we need is an adolescent vaccine programme, administered through a school health system, just as they do in Europe," Denny says. "But this might be light years away for African countries. The vaccines are also expensive."

Though the benefits of the vaccine won't be immediately apparent - "It won't happen in my lifetime," Denny says - beginning with research trials may ease the introduction of the vaccine into African countries.

On a lighter note: Benefactor and alumnus Graham Beck recently visited the Institute of Infectious Disease and Molecular Medicine where he was honoured for his support of Denny's Cervical Cancer Research Programme, an important boost to essential research at community level.