Honours for Ndebele in London 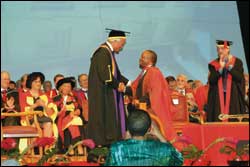 Conferring an honorary doctorate on Professor Njabulo S Ndebele last month, the University College of London (UCL) praised UCT's vice-chancellor and principal for his insightful commentaries on a range of public issues in South Africa.

Prof Ndebele received a Doctorate of Literature honoris causa. This is his second such honour this year. Almost 30 years after first rounding off his studies at Cambridge University, he returned to his distinguished alma mater in July to receive an honorary doctorate in law.

Listing his credentials as an author, UCL's supporting statement included his 1984 Noma Award, Africa's highest award, for his publication Fools and Other Stories. Prof Ndebele is also one of several international authors who contributed short stories to Telling Tales, edited by South African Nobel Laureate in Literature, Nadine Gordimer. The proceeds of this work were devoted to AIDS research funding.

He has been highly active in public service in South Africa in the areas of broadcasting policy, school curriculum in history and more recently as chair of a government commission on the development and use of African languages as media of instruction in South African higher education. Prof Ndebele is also president of the Association of African Universities and chair of the Southern African Regional Universities Association.