Elections draw to a close 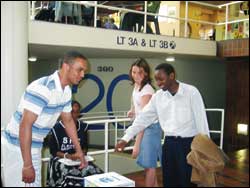 Democracy, we are told, is government of the people, by the people and for the people.

In keeping with a century of student governance, SRC candidates appealed to their constituencies to vote their way into the next 100 years. With this year's theme song, Who wants to live forever? (Queen), resounding in their minds, students cast their votes, mindful of their mark being etched in UCT history.

Spurred on by stiff competition and driven by UCT student government positions at stake, these 28 candidates were fed questions for lunch and supper in the customary Q&A sessions between September 18 and 22.

With ballots cast last week, the new SRC will be announced today.