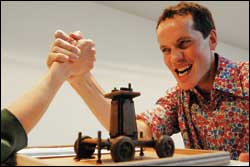 Power Play: Award-winning sculptor Johann van der Schijff shows how the AWP will be put to use. The maquette is in the foreground. (Photo courtesy of The Cape Argus.)

It's an interactive piece of work, says the award-winning sculptor and senior lecturer at the Michaelis School of Fine Art. It will invite passers-by to step up, roll up their sleeves and wrestle, arm to arm, eye to eye.

"Artwork has a playful interaction with its audience," is Van der Schijff's philosophy. It reflects his penchant for Dadaism, his eye for absurdity and humour. The sculptor sees it as a reflection of greater tussles taking place in our society. Even its name, AWP, said quickly, hints at our less than illustrious political past.

Winner of the 2006 Award for Public Sculpture, administered by the Association for Visual Arts in Cape Town, Van der Schijff sees the sculpture as a communal platform "where disputes can be settled once and for all". Just picture it: City Mayor Helen Zille and Western Cape local government minister Richard Dyantyi going elbow-to-elbow.

The two Van der Schiff would like to see arm wrestling on the podium (are you listening Tokyo Sexwale?) are 2006 World Cup Soccer's ZinÃ©dine Zidane and the head-butted Marco Materazzi.

The sculpture developed from a recent solo exhibition, Power Play, a body of work that examines power relationships in society.

"What I am consequently aiming at in this exhibition is for the viewer to be forced into a position of choice in their engagement with the work."

His winning maquette, which beat out some stiff competition from international entrants, will be fashioned into a life-sized piece, funded by his prize money. (The remaining is for the artist.) Van der Schijff established the new media section of Michaelis, one that explores the incorporation and possibilities of electronics and digital media in the creation of art. A graduate of Pretoria University, he holds two master's in fine art degrees, one specialising in sculpture from Michaelis and one in new media from Academie Minerva in Groningen, Netherland.

There is a strong industrial theme to his work. His sculptures are carefully fashioned from heavy and durable materials - stainless steel, galvanised steel, rubber - the concepts created and reproduced using computer aided design. Colleague Virginia MacKenny wrote that in his sculpture Van der Schijf had found "a legitimate career of never-ending play and tinkering".

Certainly, there is the danger of the work being vandalised by the city's informal scrap metal sector , but Van der Schijff has already covered that angle, hoping to have it cast in bronze.

The rules will be attached to the sides in four plaques: English, Afrikaans, isiXhosa and Braille. And the rules adapted from the United States Arm Wrestling Association.

This from the rules: Any competitor may use platform shoes or a riser if their belt-line is below the top of the table.

Salary disputes? Take it to the podium.