Anthology a shimmering mosaic of stories 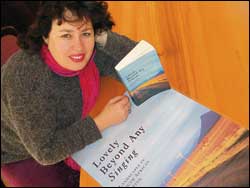 At an early age, Helen Moffett relied on two places to escape the hurly-burly of farm and family life: books and the landscape of veld, valley and mountain between Worcester and Villiersdorp.

Her just-off-the-press anthology, Lovely Beyond Any Singing: Landscape in South African writing, indulges both reader and traveller, the title sourced from the evocative opening lines of Alan Paton's Cry the Beloved Country: "These hills are grass-covered and rolling, and they are lovely beyond any singing of it".

These are rural and urban landscapes, outer and inner vistas, written by people who saw the South African land in different ways: the nomadic hunter, the aggrieved Dutch settler, the gold panner, the activist and the sojourner.

It's not an exhaustive list of writers, but Moffett has chosen a richly representative group, a product of 30 years of reading, 10 of reflection, six weeks of re-reading and research, and three memorable months writing between eleven at night and two in the morning each day, after completing her academic work in the African Gender Institute and the English literature department.

What might be seen as unusual is the exclusion of the "Big Three", JM Coetzee, AndrÃ© Brink and Nadine Gordimer. Moffett wanted an alternative South African canon, "unsung and unheralded" work.

"It's also my own effort to point my students to a counter-canon of local writers."

Divided in the three sections (Journeys; Regions; and Ghosts and Dreams), the anthology spans the country's geographic regions: from the grape curtain of the Boland to the paradise ramparts and malarial dreams of the escarpment and the Lowveld.

The stories capture more than landscape; they tell of spiritual, psychological and political journeys.

"I felt that forgotten, invisible, ordinary and marginalised accounts of the spaces from which we claim identity needed to be represented," Moffett said. "And landscape becomes a very powerful metaphor for imagining difference."

In Ghosts and Dreams, the landscapes are "lost places that still haunt us", "landscapes poisoned by politics", landscapes that no longer exist. Think of Bloke Modisane's anguished longing for Sophiatown and Richard Rive's characterful reminiscences of District Six.

"The collection would have been unimaginable without the voices of those who recalled South African scenes while in exile," she added.

Imprisonment also changes the way landscape is viewed, as seen in former political prisoner Indres Naidoo's moving account of seeing his country for the first time in 10 years during a trip from Robben Island to Leeuwkop Prison in Johannesburg.

It's also a romantic and nostalgic collection, a book she's had "in her head" for over 10 years, thanks to a young Scottish travel writer, Donald Reid.

Reid suggested a book that could slip into a backpack, that would showcase South African literature and that would paint the various landscapes the traveller would soon see.

The idea remained with Moffet for a long time. She recalls a conversation with Elinor Sisulu one wet London afternoon while reading Alexander McCall Smith's Mma Ramotse books. Sisulu felt the book succeeded because of the "tinge of longing" that coloured McCall Smith's stories.

"His Precious Ramotse books are fuelled by the nostalgia of someone who once lived in Africa, fell in love with it, and then left it, and that nostalgia manifests itself largely in the soothingly repetitive details of landscape."

Moffett admits she is a sucker for "this kind of yearning".

"[Mine] is a very personal collection and one flavoured by nostalgia," she agrees. "It's a suspect emotion, especially in a post-colonial world, available as it is only to those able to afford the luxury of retrospection. But then books themselves are luxuries that are also absolute necessities."

The anthology resonates with her own appreciation of landscape and travel and its multi-hued nuances. In her introduction she writes: "I am imprinted by what Pauline Smith calls 'spice-box fynbos'; the rank odour of crushed khaki-bush in the peach orchards; the dust raised by herds of sheep on their way from field to kraal; the zithering of Christmas beetles; a cobra whiplashing across a road; cool caves of pungent dassie scat; a leopard's fat pug-mark in the mountains; the cola colour and gurgle of the river. My feet are still broad from going barefoot everywhere, even to school."

The book is published by Double Storey and is available at Exclusives and Wordsworths.