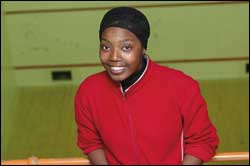 Courting honours: Siyoli Lusaseni is captain of the SA team competing at the World Student Games in Hungary at the moment.

That decision was triggered by the demands of her studies, where pressure was mounting. On occasion she still played for the UCT side in the Western Province league competition, but would often go into a game with no training during that week, and swore off some of the major events.

She still helped UCT to their second league title, but her meagre appearances saw her provincial and national rankings slip.

That was a far cry from the flyer Lusaseni enjoyed in her early days at UCT. In 2002, at the tender age of just 19 and in the first year of her studies, she was selected for the national team that went to the World Squash Championships in Denmark, becoming the first UCT player to feature in the South African squad.

She kept up the momentum, was never ranked lower than number two in the province, and was always in the running for another national spot.

This year, study issues sorted out, Lusaseni was back with a vengeance.

She's reclaimed the number two spot in the province - and moving up the national rankings - and just a few weeks ago trumped the top-ranked WP player, Karen van der Westhuizen of Durbanville. She was also in the WP squad that won the inter-provincial Jarvis Cup. In addition, she reached the quarter finals in the Gauteng Open.

"Things seem to be falling into place," she says.

Thanks to their showing, Lusaseni and Robinson, as the country's best university players, were selected as the only two women in the SA side to compete at the World Student Games in Hungary in August and September. Lusaseni was also named as the captain of the entire national squad.

(Alas, a broken nose suffered in the SASSU tournament meant Robinson had to pull out of the team.)

Last week, Lusaseni and the rest of the six-strong team left for Hungary. The side would like to, at the least, equal South Africa's performances at previous competitions, where fifth was about its best finish.

As captain, Lusaseni knows they'll have to shoulder some responsibility, especially with team selection as only two men and one woman play each game. And it'll be up to her to keep the squad's spirits up should things to wrong. And the side will likely take their cue from her on the court as well.

"I know I'll have to try and set the tone for the tournament," she says.

Whatever happens, Siyoli, it would appear, has her groove back.