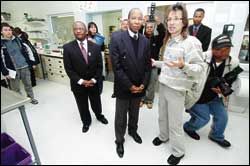 Title bid: Vice-Chancellor and Principal, Prof Njabulo S Ndebele (left), accompanied Minister Mosibudi Mangena (centre) on his visit to the IIDMM last week. Here Prof Frank Brombacher shows the minister around one of the labs in the institute.

It was an endorsement at the highest level when a delegation lead by the Minister of Science and Technology, Mosibudi Mangena, toured laboratories in the Institute of Infectious Disease and Molecular Medicine (IIDMM), underpinning South Africa's bid to host the third and African component of the International Centre for Genetic Engineering and Biotechnology (ICGEB) at the institute.

UCT's IIDMM is South Africa's candidate institution, in the running with facilities in Nigeria and Tanzania to host the African component of the ICGEB. The South African government will submit our bid on

There are only two other ICGEB components in the world: one in Trieste, Italy, and one in New Delhi, India.

Established in 1987 by the United Nations Industrial Development Organisation, the ICGEB is an inter-governmental organisation that operates in close contact with the UN Common System as a centre of excellence for research and training in biotechnology and genetic engineering, with special attention to the needs of the developing world.

And though the ICGEB's work promotes biotechnology in agriculture, its major emphasis is on health-related research: HIV/AIDS, hepatitis, the rotavirus, the human papilloma virus, malaria, tuberculosis and more recently, dengue, or "break bone fever", an infectious disease transmitted by mosquitoes, causing severe pain in the eyes, head, and extremities and accompanied by catarrhal symptoms.

Speaking from the IIDMM, Mangena said the opportunity to host the third ICGEB laboratory would spotlight South Africa as the preferred destination for global science and technology initiatives. It would also strengthen the country's role in driving Africa's development, not only from a political and economic perspective, but in terms of innovation and technology.

The Minister was escorted by a top UCT delegation, lead by Vice-Chancellor and Principal Professor Njabulo S Ndebele, who underlined the importance of biotechnology, one of the university's research signature themes.

"In the IIDMM we have a unique aggregation of scientific skills and experience and should the IIDMM be successful in its bid, it would aim to be a hub for a new drive of continental biotechnology activities and development stretching across the African continent and beyond."

He said the IIDMM would embrace the opportunity to reach out to African and global biotechnology partners, building strong and lasting partnerships. These would range from basic immunology, biochemistry, cell biology, genetics, microbiology and cancer biology to applied areas like vaccinology and drug discovery.

And while South African representatives will be holding thumbs this week, health sciences dean, Professor Marian Jacobs, said: "As a faculty implementing the university's vision as an African institution, we are not in competition with other bidding institutions in Nigeria and Tanzania. Rather, we see this as an opportunity to strengthen our ties with them through a partnership of collaboration."

If the bid is successful, the DST will contribute R22-million over the next three years towards the establishment of the ICGEB component at the IIDMM.