A lifeline to learners 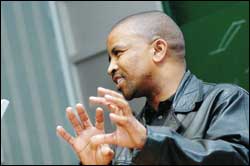 A shining light: Sibusiso Masekohas inspired many with his teaching.

When UCT people talked to and about Sibusiso Maseko last week, just as they presented him with the university's inaugural Stella Clark Teachers' Award, the word inspiration came up a lot.

For good reason. Maseko is a physical science and maths teacher (now acting principal) at Zwelibanzi High School in the Umlazi township south of Durban. From here, he has over the past years - with no lab or nifty equipment - turned around the marks and lives of science learners across the province.

Maseko studied science at the University of Zululand and received his teacher training at the University of KwaZulu-Natal. Angered by his own schooling and by some half-hearted university lecturers, he said no to corporate South Africa and chose instead to become an underpaid teacher at Zwelibanzi.

"I was angry," he says. "And I wanted something better for my community."

Maseko didn't hold back. He started up after-hours classes for his own students and those from surrounding schools. Those sessions would go on till eight at night, and the long days earned the school the nickname of 'The Firm'.

He set up winter and summer school in the township, attracting learners from across KwaZulu-Natal. He ran similar matric sessions in Limpopo province for BP.

Students who wanted to get into university came knocking at his classroom door. And they remembered him. One of his early matriculants went on to complete an MBChB, and on graduation wrote Maseko a letter to declare himself the teacher's first medical graduate.

Maseko's dedication caught the eye of the isiZulu-broadcaster Ukhozi FM - said to be the largest radio station in Africa - for whom he presents a weekly show on physical science. In 2004, he was voted the best teacher in KwaZulu-Natal.

And when UCT's Centre for Higher Education Development (CHED) called for nominations for its first Stella Clark Teachers' Award - named in honour of the late senior lecturer in the centre's Language Development Group, whose family and friends established the award to honour teachers who go beyond the call of duty to provide outstanding education in often difficult circumstances - UCT students who had spent time under Maseko's wing sang their teacher's praises.

"The Zwelibanzi learners and teachers idolised him and still do today," wrote commerce student Phumlani Nkontwana in his nomination. "Not only the learners but also the teachers at Dloko High [Nkontwana's school] spoke about his dedication, tireless effort and tons and tons of time that he freely and willingly give to his community."

Supporting testimonies poured in from other UCT students.

Last week, Vice-Chancellor and Principal, Professor Njabulo S Ndebele, made the Stella Clark award to Maseko at the naming of the ZK Matthews Gallery in Hoerikwaggo, at which the Minister of Education, Naledi Pandor was also present. About 30 of Maseko's former students now at UCT were among those to attend the event.

They couldn't stop waxing lyrical about the man that they call, well, a true inspiration.