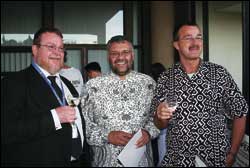 Communities have been successful in preventing infectious diseases with vaccinations. It is now time to prevent trauma, injuries and violence.

This was the resolution declared at the15th International Safe Communities conference held at UCT in April.

Hosted by the Child Accident Prevention Foundation of Southern Africa (CAPFSA), the conference brought practitioners together to discuss good practices in promoting children's safety at home, at school and in the wider community.

CAPFSA director and conference chairman, Prof Sebastian Van As, explains: "Not many people are aware that trauma is the number one disease in South Africa and accounts for more hospital admissions than any other disease."

According to Van As, people are not doing enough to protect children, even though a child has a higher chance of getting hit by a car than catching an infectious disease such as polio or measles.

"And this is extremely important, particularly in Africa where half the population is made up of children. They are particularly vulnerable in our society."

This year's conference focused on low-income regions. According to a Unicef report published in 2001, over 90% of accidents involving children occur in the developing world where there is a severe lack of safety awareness.

CAPFSA focuses on creating a safer world for children and is located in the Department of Paediatric Surgery at the Red Cross Children's Hospital.

Van As elaborates: "My vision is that it is useless to wait in hospital for patients to arrive and then kick into action. I believe that it is our responsibility to go into the communities and stop trauma, violence and accidents. The real impact would be to stop trauma at its source."

CAPFSA works in co-operation with existing resources in communities and so requires no external funding.

It takes a three-pronged approach in promoting child safety.

It conducts research to identify common injuries affecting children, and maintains the largest single centre database in the world of approximately 150 000 children who have been hospitalised after trauma.

It also runs community educational programmes on safety best practices in places like schools and crÃ¨ches.

Finally, CAPFSA uses advocacy to raise awareness at government level and to influence policy-making on issues such as abuse and road safety.

"By implementing these programmes, we have seen trauma reduced by up to 70% in certain communities, just by educating people, because when they have the knowledge they act."

CAPFSA is part of the Community Safety Network Programme of the World Health Organisation (WHO).

So far, there are 100 WHO designated "safe communities" worldwide that have demonstrated an improvement in promoting safety, including Eldorado Park in Johannesburg and Nomzamo and Broadlands Park in the Western Cape.