Engineers save a penny with in-house design 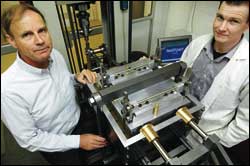 From the ground up: Dr Friedrich Scheele and Wesley Rouncivell with the Large Direct Shear Device.

Large Direct Shear Devices don't come cheap. Two years ago, when UCT's Department of Civil Engineering's geotechnical team under Dr Friedrich Scheele was looking into buying one from the UK, it came with a price tag of around

With inflation and the current exchange rate, the machine - which is used to measure the strength of soil when it's subjected to normal and shear stress - would today set the department back a cool half million.

That was a bit too rich for their blood. But Scheele desperately needed one for his work, and that of master's student Wesley Rouncivell, on shear testing of SA soils and, in particular, on interface testing of geosynthetic clay liners and geomembranes. So he took it upon himself to design one.

Cleverly, Dr Scheele conceptualised the machine so that it's directly attached to a Universal Testing Device, worth some R1.6-million, already stationed in his geotechnical engineering lab. The shear device, explains Scheele, converts the Universal Testing Device's vertical force (the up-and-down motion of its parts) into a horizontal force that moves the shear device's parts from, if you will, left to right, driving the shear forces into the test sample.

And with the workshop skills of principal technical officer Eike von Guerard, who's saved the department a few pennies in the past by cobbling together vital pieces of equipment, civil engineering inducted the up-and-running device into the geotechnical lab last week.

The machine is one of only two or three in the country. While no one knows what it finally cost the department to make the device - everyone scrimped and scrounged where they could - it came in at a fraction of that shopping bill, says Scheele.