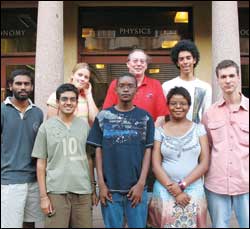 From the entries in the annual MITTAL South African Science Olympiad, 189 grade-12 pupils with an aptitude for physics were chosen to enter the first Physics Olympiad in 2005. Of the 10 finalists, coached by Case Rijsdikjk of the SA Institute of Physics, Kevin Govender of the South African Large Telescope and Dr Andy Buffler of the UCT physics department, five have registered at UCT.

"It is reassuring to experience this kind of potential in the field of physics and I believe this first-ever Physics Olympiad in South Africa will set the scene for it to become an annual event," said Olympiad convenor Rijsdijk.

The Olympiad was part of the Department of Science and Technology's support of the United Nations International Year of Physics campaign to remind the youth that physics is part of everyday life. The campaign's slogan is It's your Physics.