Lavish costumes– and the Karoo 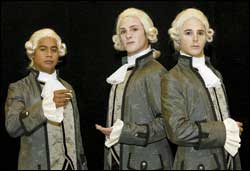 Theatre lovers are in for a dramatic treat with the two must-see productions on show at the Baxter this week.

The smash-hit play Amadeus running from March 17 to April 15 is bursting with UCT talent, with about 70% of the cast UCT graduates.

Described as a visual and aural treat, the Baxter production coincides with the 250th anniversary of Mozart's birth.

Also at the Centre from March 21 to April 8, we are invited to take a journey into the exhilarating and magical world of two young outcasts obsessed with movies, money and Maggie in De Wet's Dream.

In a two-man performance, Luke Rous and Meren Reddy bring to life 13 colourful characters and countless locations in a comic and touching story about love, brotherhood and the Karoo's most famous crime never told.

Brothers Freddie and Russell De Wet own a video store in the middle of De Aar, and live in a world of films. Despite their tragic family history, all they care about are movies, and of course Maggie, another young dreamer, whose failed attempt to leave De Aar saw her only get as far as Beaufort West.

Russell and Maggie's young love starts to blossom at her 18th birthday party, and he realises that, in order to offer her the life she wants, he will have to do more than own a video shop. So one quiet night in the town of De Aar, Russell falls asleep watching a video, and dreams of a better life with Maggie and all the money he could ever wish for. The only little problem is getting it.

With no set, props or costume changes, the actors use only their bodies, their unique comic timing and physical imagery to bring to life a poignant tale about dreams.