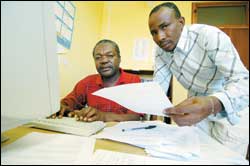 Apartheid-era education officials will be turning in their graves.

Back then, it was a foregone conclusion for many that African languages just weren't grown-up enough for the tongue-twisting demands of technology and natural-sciences lexicon. It's an idea that persists.

"There is a general misconception that you can't teach through the medium of African languages because of they lack scientific terminology," says Keith Welman of the Terminology Development Unit of the Study of Alternative Education in South Africa (PRAESA).

Now Welman and Zola Wababa, his colleague in the unit, are setting the record straight. In a first for any indigenous language in the country, the two have been building up, almost from the ground, a mother lode of scientific, technological and mathematical terms, and their definitions or explanations, in isiXhosa.

The lexicon has made its way into two dictionaries, one on science and technology, the other on maths. Each is crammed with thousands of new isiXhosa words, most freshly coined by the authors.

Both books are aimed at intermediate- and senior-phase school grades. So they cover just about every conceivable term a young learner could need (in isiXhosa, Afrikaans and English), starting from "abacus" and "absorb" and ending "zero" and "zinc".

The words are no thumb-suck. Wababa and Welman did their homework, attending many courses on etymology and lexicography before even beginning to tackle the project.

They learned to borrow words from, mainly, English - many of which English lexicographers had borrowed from elsewhere - and used the descriptive nature of isiXhosa words to cobble together their own. So a word like polygon, which describes an object with many sides, became ucala-ninzi. (Cala referring to a side, and ninzi referring to many.)

But the writers also fell back on some unlikely sources, like words developed during the period of apartheid's "Bantu education". Or even ones teachers made up over the years to help both themselves and their students, and which have stuck.

To see how their lexicon stands up to actual use, Wababa and Welman test drove the science and technology dictionary, currently with publishers New Africa Books, with some local schools. And they'll do the same for the maths dictionary shortly.

The goal, explain the writers, is to prepare students for high-school and university learning in the sciences by laying a proper foundation in their home languages.

"That way they'll be able to understand things much better in English, which is most likely to be their first additional language or second language," says Wababa.

The dictionaries also sow the seeds for a project the unit has in the pipeline, a bilingual isiXhosa/English natural-science textbook for intermediate grades.

The Terminology Development Unit invites students and staff who speak African languages (especially Nguni) in the departments of science, mathematics, botany, etc, to contribute to building the corpus of these languages so they can be used as mediums of teaching, learning and assessment.