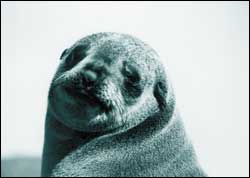 Gathering and picking through seal poop in Namibia might sound like a humble if not entirely sought-after occupation. But PhD graduate Silvia Mecenero's analysis of seal scats reveals some telling points for the local commercial fishery.

Mecenero's husband was a biologist with the Namibian Ministry of Fisheries and Marine Resources, and with two years in LÃ¼deritz she looked around for a project she could get her teeth into, something she could turn into a PhD.

She was fortunate; the ministry had eight years of existing seal scat data, taken at monthly intervals from the three main breeding colonies: Cape Cross north of Swakopmund and two in the diamond-mining areas south of LÃ¼deritz; Atlas-Wolf Bay and Van Reenen's Bay.

Rolling up her sleeves, she carefully reconstructed the seal diets (Mecenero's model estimated that a female with an average mass of 56kg ingested 13% of its body mass each day, ie about 7kg), augmenting the data with her own samples.

It wasn't particularly enviable fieldwork; skirting the seal colonies to gather handfuls of scats by hand, some solid, some not, and sieving the otoliths from the gunge. But by 2002 she was ready to begin analysing her data (her PhD was co-supervised by Frenchman Jean-Paul Roux and the Avian Demography Unit's Professor Les Underhill).

"People don't understand, I loved it," Mecenero says to protests about smelly seal droppings. She's always been an ardent biologist, from her school days when she was part of the Ecology Club. In LÃ¼deritz, no-one baulked at a woman in fetid, scat-streaked overalls.

What makes otoliths so valuable? The tiny accretions of calcium carbonate develop in the ear canals of the heads of bony fish, acquiring yearly growth rings, or annuli, just like trees. The age of the fish can be calculated by counting the annuli.

They also have unique shapes and sizes and tell researchers what species of fish the seals have been eating. By measuring the otoliths, Mecenero was able to get an idea of how big the fish were.

It was laborious work, dissolving the scats in water, sieving through the fishy debris and drying the residue. One large sample delivered over otoliths.

From these, Mecenero estimated the monthly percentage abundance and mass of the six fish prey groups and compared these between the three colonies and at annual, seasonal and monthly scales.

The data gave her an estimate of the quantity and type of fish the lactating seals were eating. And there were discernible patterns. The first was a variation in the seal diet from colony to colony.

"The diet showed annual, seasonal and monthly variation," Mecenero noted. "But evidence didn't show any strong annual patterns and I couldn't make any predictions on a seasonal basis."

Her data did show that seal prey overlapped with the purse-seine fishery; particularly the Cape horse mackerel, one of two staples of the Namibian commercial fishery. But the total annual consumption of Cape hakes and Cape horse mackerel by lactating females at Cape Cross, one of the main fisheries, was less than the amount taken by the fisheries.

It's an important insight, given the grumblings of commercial fisheries that seals gobble up vast quantities of the horse mackerel and Cape hakes, and mitigation against seal-pup culling programmes.

Her overlap models between seals and the fishery also showed that seal consumption of juvenile horse mackerel was high only when these fish were abundant and low when shoals were small.

Mecenero also looked at whether she could use horse mackerel information from the seal scats to predict future fish stocks.

The data vindicates the hours spent wrist-deep in seal scats, and she's confident that her study could be used to complement fishery and survey data to improve models for the management of the country's valuable horse mackerel resource.

Mecenero's investigations also shed light on another conservation issue. Among the seal scats she found a couple of seabird feathers, bearing out what conservationists feared: seals were indeed eating endangered seabirds, a point of some controversy.

However, her analysis showed that seabirds were in fact negligible, at least in the diet of the lactating seals at the study colonies.

"It confirms the current belief that it's a minority of sub-adult males that are mainly responsible for this predation," she notes.

"The attacks may be an extension of play behaviour, and in some cases have been likened to surplus killings observed in other carnivores." 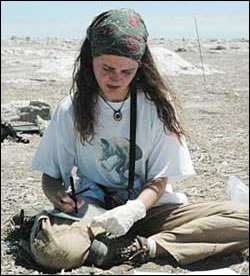 Hands on: PhD and postdoc in the Avian Demography Unit, Dr Silvia Mecenero, in the field.

As a South African Environmental Observation Network (SAEON) - supported postdoctoral fellow, Dr Silvia Mecenero is also compiling an inventory of long-term South African environmental datasets (active and dormant). This metadata (information about the data, like the ingredients label on a jar of Marmite) will feed into SAEON, a major National Research Foundation project, funded by the Department of Science and Technology.

SAEON will establish long-term monitoring and understanding of environmental indices, ecosystem functions, environmental and land use changes, and determine the impact of these changes on South African society. Relevant datasets include comprehensive baseline studies covering any aspect of the environment, such as flora and fauna, climate, geology, water, soil, oceanography, land use, and so on.

The metadata will be available on the SAEON website as a search interface, assisting researchers to locate datasets of interest and to establish new contacts. All those conducting long-term environmental research should join the network to secure the datasets for posterity. For more information, go to the website http://www.saeon.ac.za.