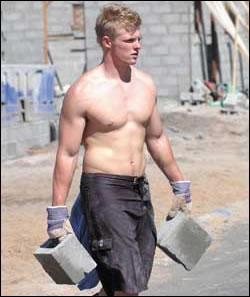 Forty big-hearted members of UCT's rugby club gave up their Saturday to lend a hand building homes for shack dwellers in Netreg on the N2.

The volunteers were made up mainly of UCT students on the under-20 teams, and were led by former Springbok number eight and Polar explorer, Dugald MacDonald. The students joined forces with the Niall Mellon Township Initiative (NMTI), a charity that builds quality brick homes in townships in Cape Town.

Half of the burly 18- to 20-year olds were given Wellington boots and spades and were put to work shovelling and smoothing the concrete foundations. The rest prepared the slabs for concrete and put their backs into labouring.

By down-tools time at four in the afternoon, the students had laid the foundations for nine new homes.

MacDonald, president of the UCT Rugby Club, explained that the students' involvement is part of their Good Citizen Portfolio, which sees students and coaches training formerly disadvantaged players in areas like Guguletu, Langa and Nyanga. But this is the first time they have turned their hand to building.

"It is always rewarding to be involved with something where you are giving of your time and energy to those who are worse off than you," said MacDonald. "The majority of these young under-20s don't know each other, so it has also been a good team-building exercise and I think everyone's enjoyed it." Twenty-year-old law student Keane Robertson agreed. "It's been really good for us," he said. "I've met the guys who I will be playing with this year and the locals whose houses we are helping to build. It's good to find out what life is like here for them."