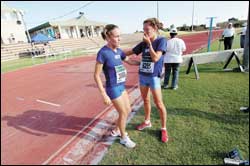 Pacesetters: Lauren Stewart and Unice Vorster catch their breath after their footrace.

It's still quiet on the sporting front, but a couple of UCT teams and individuals have been doing their thing on the local circuits.

The UCT women's half-marathon team is priming itself for the defence of its Two Oceans title in April. On Saturday, February 25, team members entered a 5 000m race at a Western Province league meeting for some speed training. Lauren Stewart and Unice Vorster matched each other stride for stride, but it was Stewart who powered ahead on the home straight, pipping her training partner by a few seconds.

Following good showings in the season-opening indoor hockey tournament, four UCT players were selected for the Western Province side that took part in the interprovincial tournament in Durban last week. These were Matthew McConkey, Craig Ross, Zeno Rossouw and Adam Wilson. Handy for them, also, that UCT coach Pierre le Roux also had the reins of the WP outfit.

There were SASSU (the South African Student Sports Union) competitions aplenty over December and January. Here are some memorable UCT results: