Smorgasbord of drama for Ikhwezi 2006 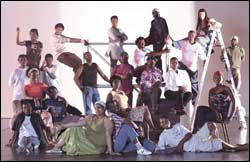 In control: The festival's young directors who will run the show.

The festival celebrates the convergence of the best community-based drama groups in the Western and Eastern Cape, from Cape Town to Bellville, Paarl, East London and Port Elizabeth.

Through drama, music and dance, a selection of 11 new and original plays, under the leadership of 23 young directors, will paint an evocative and lively picture of life in the townships. Themes explored range from relationships and love, gangsterism and violence, sexuality, politics, unemployment and HIV/AIDS.

Festival director Itumeleng Wa-Lehulere said: "The growth of the festival is most encouraging, with one group coming from as far as the Eastern Cape to participate. The enthusiasm of these young directors is contagious and this year we have eight women directors participating."

The festival is a culmination of a comprehensive training programme of workshops, during which the directors were taken through their paces under the guidance of highly acclaimed local playwrights, directors and other theatre specialists.

They were steeped in the finer art of directing, such as pre-production planning, casting, rehearsals, and the opening night.

A Baxter Theatre Centre initiative, Ikhwezi started in 1998 and in 2004 won the Cultural Development Project of the Year Award from the National Arts and Culture Trust.

The aim of the festival includes developing critical thinking among audiences and theatre practitioners through the arts; popularising social programmes such as health, environment, education and human rights; using the arts to stimulate community initiatives; developing new playwrights in the Western Cape; and exposing new and upcoming actors, writers and directors to mainstream theatre.

For festival enquiries including details of the line-up, contact Ikhwezi on

Book through Computicket or the Baxter Theatre Centre on