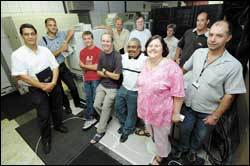 Power to the campus: The UCT team, part properties and services, part ICTS, that has been pulling out all the stops to keep UCT servers up and running. They are (from left, back) AndrÃ© le Roux, Michael Wood, Craig Balfour and Nelis Lamprecht. (From left, front) Peter Byrne, AndrÃ© Theys, Justin Fuidge, Andrew Lewis, Ashley Rustin, Pippa Moll and Randolph Thompson.

Hats off to the staff in Information and Communication Technology Services (ICTS) and properties and services whose hard work secured UCT's computer network and servers.

The crisis started in the early hours of Sunday, February 19, when ICTS staff were called in to monitor the power situation, having to keep a careful eye on the approximately 120 servers and 70 network devices that have to be switched on and off in sequence.

On Sunday, they learned there would be another outage, and shut down all the systems. The following morning, at 05h15, they were given the go-ahead to start up again, and were all ready to go by 07h00 when five minutes later the power cut out again.

This called for drastic measures.

Figuring that it would be unsafe to bring the whole system up with unstable power, because of the serious damage this could do to servers (Curie and Southone had already been at risk), they decided to play it safe and go to plan B.

This was to connect a generator to a temporary computer room. Fortunately, a generator had already been installed in readiness for a new computer centre, which is currently under construction and due to become operational within a month.

The switch over to the temporary computer centre took most of Monday and at midnight they were able to connect it all up with the help of staff from Properties and Services.

Staff who arrived for work on Tuesday were consequently able to access their e-mail.

The advantage of the new "life support" system is that staff can access the servers from home, even if UCT has a power cut. Also, UCT's website is online and can be accessed from around the world.

In a communication to staff and students, vice-chancellor and principal Professor Njabulo S Ndebele said UCT would continue to negotiate with the City of Cape Town in an effort to agree to voluntary, predictable outages.

He also commended Prags Naicker of ICTS and John Critien of properties and services for the impeccable handling of this significant challenge.

What to do in future?

What will happen if the power fails again?

As described above, the generators will keep the equipment in the data centres up and running.

How can I avoid damage to my PC?

In the case of a power outage, please switch off all PCs and printers at the wall to avoid damage due to power surges when power is restored.

Have I lost any e-mail messages?

It is highly unlikely that you have lost any e-mail messages. Most remote e-mail servers will try to deliver messages for four days before bouncing the message to the sender.

Equipment located outside the data centres may well have failed due to the power outages. Please log a call with the IT Helpdesk on ext 4500 if you experience problems.