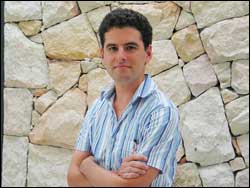 Antony Millner has just come from a stint teaching maths at the African Institute for Mathematic Sciences (AIMS) in Muizenburg.

He looks relaxed and happy, and with the prestigious S2A3 Bronze Medal - and a purse of R15 000 - from the South African Association for the Advancement of Science in his pocket, he should be.

The medal is awarded for the country's top master's thesis, in all the sciences.

"It's nice to get recognition and it definitely helps on the CV," he says.

Several UCT master's students have won the award in past years. Last year RÃ©becca Rademeyer (maths and applied maths) won it; in 2003 it was Ashley Muller (civil engineering) and in 2002 it was Justine Tinker (geological sciences).

Millner is one of a set of permanent tutors at AIMS, the brain child of Neil Turok (son of Ben Turok, the ANC MP), a professor of mathematical physics in Cambridge, and Millner's supervisor there. A collaboration between the province's three universities, this postgraduate diploma in mathematical and computing problem-solving is taught in association with the maths faculty at Cambridge and the physical sciences division at Oxford. The students who come to the institute are all African postgrads.

"Teaching is very rewarding," says Millner. It's one arm of a tussle that preoccupies him at times: should he pursue academic teaching or a PhD? Last year he took up a place on Cambridge's pedigreed Part III of the Mathematical Tripos course, or Certificate of Advanced Study in Mathematics, one of 100 students who cracked the nod on the world's oldest and most famous mathematics exam at master's level.

The course, he says, is "quick and brutal", a screening process for Cambridge's PhD programme in mathematics.

Though he got distinctions, he opted not to take a place on the programme.

"I wasn't quite ready for three years of British weather," he jokes. His specialty, string theory, gives new insights into the physics of phenomena that are "impenetrable to traditional theory".

Elegantly written, one extract from the abstract of his master's thesis, Noncommutative Phenomena in Flat and Curved Space-times, reads:

"In the final and most ambitious chapter, I make a tentative study of whether noncommutative geometry can help us to understand cosmological singularities. One of the reasons why a quantum theory of gravity is such a desirable thing is that it would hopefully enable us to make meaningful statements about physics in extreme situations such as the Big Bang. String theory may be able to shed some light on this issue, since it forces us to rethink what it means for space time to be singular."

With teaching and a PhD like mirages on his horizon, where does he see himself in 10 years?

"Relaxed and happy," he confirms.

The sidestep is consummately executed - and mathematically precise.