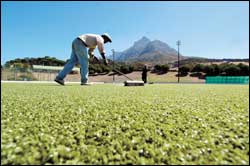 Field of dreams: The new UCT hockey turf, ready and waiting for the new year.

Racing to work along De Waal Drive, some of you may have noticed the work going on at the UCT hockey field over past weeks.

What you witnessed was the laying of a brand spanking new, R1.6-million artificial surface (or Astroturf, as some know it), which includes a new shock pad and carpet. The pitch is sand-dressed, requiring watering only by choice and just a few loads of sand, which is brushed into the pile and is barely visible when playing.

The choice of carpet - sand-dressed versus water-based - was inspired in part by the tighter water restrictions imposed over the past two years, says John Donald, director of the Sport & Recreation Department at UCT. The pitch can be watered though, should the occasion require and the rainfall allow.

It's a sizeable investment, but well justified, says Donald. Fourteen UCT teams play at least half of their WP league games on the turf. Then there are the 34 teams that compete in the UCT internal league, which is bracing itself for a boom this year. Not to mention the many school sides that make use of the field during the week.

The turf, good for at least 10 years according to the guarantee slip, should weather the onslaught with aplomb, adds Donald.

"It's a really excellent pitch."